Everyone passed the coloured belt grading! Particular mention should go to the two Jones sisters – Jasmine and Isabelle. Isabelle was awarded the grading award for Bristol South whilst passing her 1st kup grading – no easy feat at this level! Her sister Jasmine also achieved an A pass! The grading award for Bristol North went Mr Joe Davies (didn’t grab him in time for a photo!). 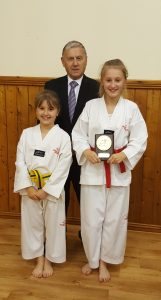 Also at the grading, many black belts were awarded their certificates from black belt gradings held this year.. 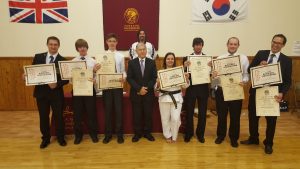