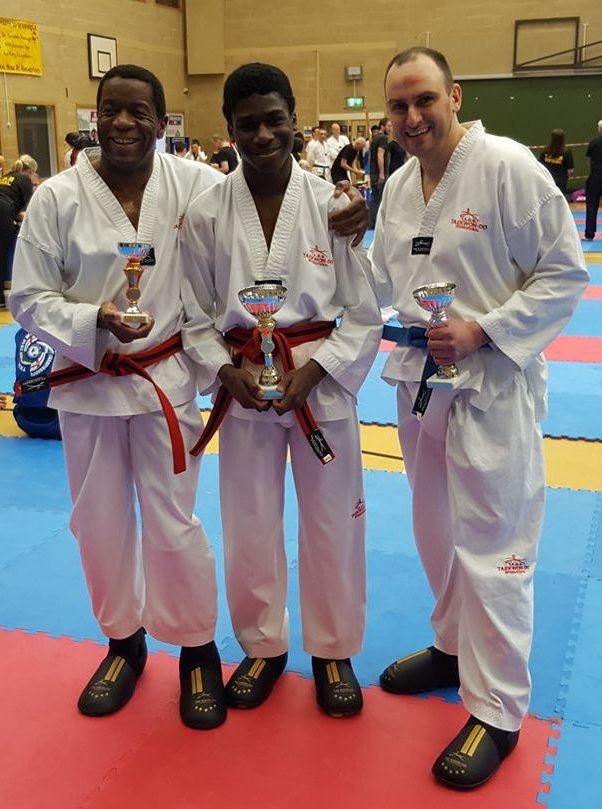 The West of England Championships; another well run and happy tournament! Many success stories for our clubs; Gerty Bird of Southville getting gold was fab. Bella Martin also got gold, naturally, distant cousin! From North, Ramat Cole-Akanni got gold for red belt ladies patterns. That lady does a pattern like a terminator!

For me the star of the day has to be Habeeb Cole-Akanni, starting his day off with a blistering pattern to win gold, he went on to fight in the adult division for the first time, being only just 16. He entered as a lightweight but there was nobody to fight! He went up to middle weight and after three hard fights won GOLD.

Tyler Brunt fought some amazing fights to gain the gold at boys heavyweight black belt level – awesome. Others to remember on the day, the ‘United Unicorns’ tag team (Keira Brunt, Zainab Cole-Akanni and Elena Sapokaite), put up a good fight against a more experienced black belt team to eventually come away with silver. There was a silver for Carlo Grasso (and a broken toe – proving his opponent, Habeeb, is indeed a tough cookie!), and bronzes for many many others.

This is always a fine tournament. Don’t forget it’s sister; the Southern in October!

Full results for our clubs: